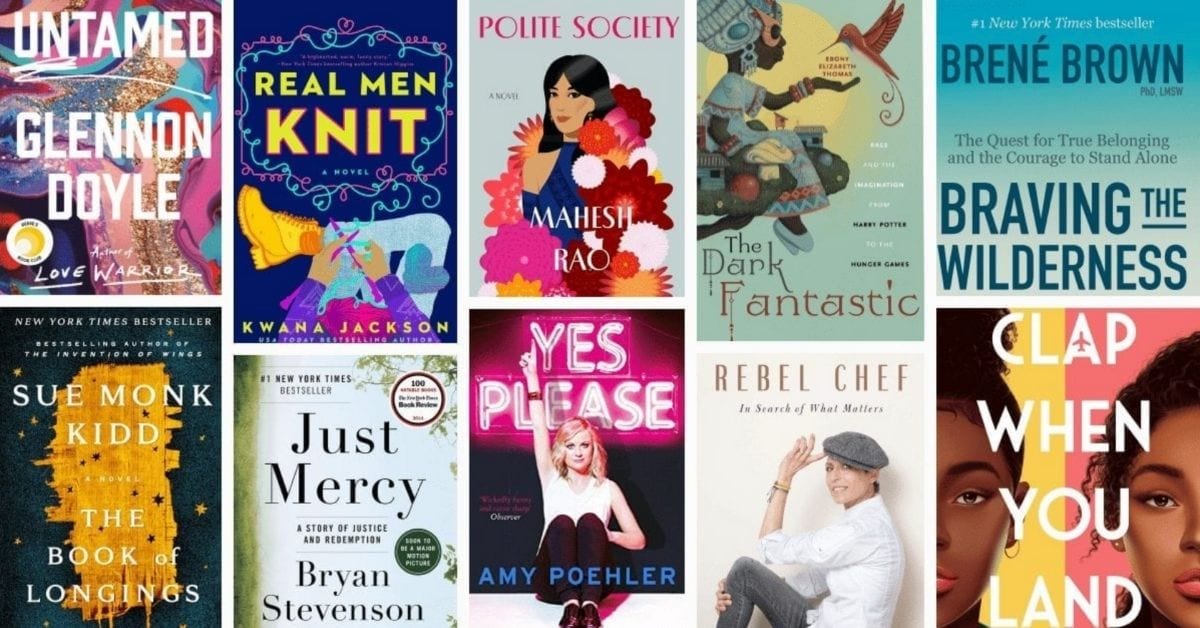 The summer of 2020 certainly isn’t a normal summer – no flying away to tropical destinations or sitting by the beach in folding chairs. But while we may not be living in typical times, we can still escape inside the pages of a book. Books ideal for poolside lounging are typically called beach reads.

This list includes a little something for everyone. Some of these beach reads are pure, delightful escapism – rom-coms, historical fiction, fantastic worlds. Some are edge-of-your-seat page-turners. A few are inspirational reads, because who couldn’t use a little pick-me-up in these trying times? Some are oldies but goodies – beach reads from years past you may not have gotten around to reading.

Notably missing from this list are professional development books for teachers – those will come in a different list, next week. For now, sit back, dip your toes in the water, and dive into a good book. You deserve it.

Just so you know, we may get a small share of the sales made through the Affiliate links on this page.

With a title like Beach Read, how could Emily Henry’s book not make this list? Two writers, both with writer’s block, find themselves vacationing only houses away from each other while they try to work themselves out of their writing rut. She writes romance, he writes literary fiction. They strike a deal – he will write something with a happy ending, and she will try to write the next Great American Novel.

2. Bored and Brilliant: How Spacing Out Can Unlock Your Most Productive and Creative Self

Combining research with real-life examples, author Zomorodi shows readers the surprising benefits of a bored brain. The book features practical tips on how to cultivate that spaced-out state that leads to benefits such as increased productivity and creativity. Lots of the tips focus on cutting down screen time, rather than turning to devices when bored.

3. The Pull of the Stars

This book will not be for everyone, as it hits close to home, but this list would be remiss without mentioning Donoghue’s new novel. Donoghue is known for the page-turner Room, and The Pull of the Stars hits the same note. This time, she writes about the Spanish Flu pandemic of 1918. The story is set in Ireland and offers notes of surprising hope amidst tragedy.

Weiner is the queen of chick-lit, and Big Summer is a book Entertainment Weekly called “the beach read to end all beach reads.” In this story, best friends Drue and Daphne have a falling out. They don’t speak for years. Then one day, Drue walks back into Daphne’s life and asks her to be maid of honor in her wedding.

5. The Book of Longings

Kidd, the acclaimed author of The Secret Life of Bees, released her fourth book in April. Set in the first century, Ana, sister of Judas, encounters 18-year-old Jesus and marries him. She lives together with Jesus, his brothers, and his mother Mary in Nazareth. The focus of this meticulously-researched novel is on Jesus’ humanity and the New Testament through a woman’s eyes.

6. Freedom Writers Diary: How a Teacher and 150 Teens Used Writing to Change Themselves and the World Around Them

After the major motion picture of the same name, most people have heard of Erin Gruwell, a first year teacher who inspired a group of “unteachable” kids. Gruwell’s story is inspiring today, in a time when many teachers might enjoy traveling back inside a classroom, even if it’s just within the pages of a book.

In this powerful reimaging of Greek mythology, Circe discovers of her powers of witchcraft and is banished by Zeus to the human realm where she hones her craft. Here, she comes face to face with famed monsters and men, including Icarus, the minotaur, and Odysseus.

8. Clap When You Land

Acevedo wrote The Poet X, which won the National Book Award. Clap When You Land is, like The Poet X, written in verse and tells the story of two teenage girls who cope with the loss of their fathers.

Heart-breaker Jesse Strong loves one woman most of all – his mama. When she passes away, he vows to keep her knitting store, Strong Knits, alive. Shope employee Kerry Fuller, who happens to have a crush on Jesse, volunteers to help.

Yep, that Hillary. Sittenfeld is a powerful writer. Here, she imagines a world in which Hillary Rodham rebuffs Bill Clinton’s proposal and blazes her own path.

11. How the Penguins Saved Veronica

85-year-old grandmother Veronica McCreedy is estranged from her family. Searching for someone to leave her fortune to, she visits Antarctica after watching a penguin documentary. Her grandson, Patrick, flies to Antarctica in a last-ditch effort to get to know Veronica, and some frozen hearts start to thaw in the coldest place on earth.

Set in Portland, Oregon, this is a modern-day story about Black mermaids. Teen siren Tavia is forced to hide her magical voice while her classmate, Effie, is dealing with her own family problems. The two band together to save each other – and themselves.

13. More Than Enough: Claiming Space for Who You Are (No Matter What You Say)

If you’ve picked up Teen Vogue magazine in the past few years, you’ll have noted that it contains some truly outstanding journalism with a serious social justice bent. That’s thanks to the visionary editing of Elaine Welteroth, author of this book that is described as “part-manifesto, part-memoir.” In today’s political climate, it’s a must-read.

14. Rebel Chef: In Search of What Matters

by Dominique Crenn and Emma Brockes

Dreaming of being a chef but knowing she will get nowhere in the male-dominated world of French restaurants, Dominique Crenn moves from France to San Francisco. Decades later, she is awarded three Michelin Stars in 2018 for her restaurant Atelier Crenn, the first female chef in America to be awarded such. This is her memoir.

15. Wild: From Lost to Found on the Pacific Crest Trail

Wild is the memoir of Cheryl Strayed, a young woman who loses her mother and spirals out of control. She turns to drugs and infidelity until those, too, stop numbing the pain. In a last-ditch effort to drag herself up from rock bottom, she commits to hiking the Pacific Crest Trail. Wild is raw, unyielding, and, ultimately, healing.

This is a retelling of Jane Austen’s Emma set in modern-day India. It follows Ania, who has high society right where she wants it – until her nephew from America arrives and shakes up her ordered world.

17. Braving the Wilderness: The Quest for True Belonging and the Courage to Stand Alone

Acclaimed speaker and author, social scientist Brené Brown, PhD, LMSW, writes in Braving the Wilderness about the importance of speaking our truth. She touches on the current and divisive political climate, writing at length about walking the tightrope between holding firm beliefs and engaging in civil discourse with those who may disagree with us.

18. A Walk in the Woods: Rediscovering America on the Appalachian Trail

A classic that begs to be read during warm summer months spent outdoors, author Bill Bryson acts as tour guide to the trails, animals, and sometimes-wacky people of the Appalachian Trail.

19. Eat, Pray, Love: A Woman’s Search for Everything Across Italy, India, and Indonesia

Elizabeth Gilbert writes honestly about how she felt unfulfilled by her “perfect” modern life. She leaves everything behind in search for greater truth, seeking the best food, spiritual enlightenment, and ultimately, true love.

20. Hitchhiker’s Guide to the Galaxy

Quirky and surreal, this classic follows earthling Arthur Dent, and his alien companion, Ford Prefect, as Prefect does research for a new edition of the classic book The Hitchhiker’s Guide to the Galaxy.

Untamed is “the” book of the summer. It’s a powerful book by a woman who is an acclaimed activist and author. In this book, Doyle guides readers to truly find themselves by listening to the voice deep inside.

Leslie Knope from Parks and Recreation brings her signature comedy style to her memoir, a story of family and comedy melded into one. It’s funny and real, and makes for a perfect summer read. This is one of those beach reads you’ll want to share with your friends.

Everything feels a bit off-kilter anyway, so why not pick up this retelling of the classic Pride and Prejudice with a zombiefied twist added.  Elizabeth Bennett is the same heroine we know and love except now that a plague has overtaken England, she has to juggle Mr. Darcy with the occasional zombie attack.

When a military spacecraft crashes and the nearby town is stricken with a deadly disease, the government moves in with Project Wildfire, a protocol to stop the disease before it spreads.

25. Into Thin Air: A Personal Account of the Mt. Everest Disaster

House on Mango Street is lovely and if you haven’t read it yet, this should go to the top of your list. Cisneros writes a coming-of-age story in a series of vignettes that tell of Esperanza on the cusp of young womanhood. It’s deceptively short, but should be read in sips to absorb and contemplate Cisneros’ command of the written word.

27. The Dark Fantastic: Race and the Imagination from Harry Potter to the Hunger Games

This book will have you reading about reading – specifically, you’ll dive into an exploration of race in young adult fiction. In a world where we are all pledging to become actively anti-racist, it’s worth considering how characters of color in YA fiction and movies are marginalized.

Lovely War is a story of love and war told to us by a special cast of Greek gods and goddesses. Specifically, Aphrodite tells readers the story of one of her great triumphs, the love she spins between Hazel and James. Their story plays out against the backdrop of World War One, so the gods of war and death make appearances, as does Hephaestus, Aphrodite’s oft-jilted husband.

A memoir by the author of The Secret Life of Bees and The Book of Longings, this beautiful story tells us of a mother and daughter traveling together in Greece. The ancient overlaps with the modern as myths inform the author’s understanding of today’s world.

30. Just Mercy : A Story of Justice and Redemption

Bryan Stevenson is the founder and executive director of the Equal Justice Initiative, an organization that gives legal representation to prisoners on death row. He has won relief for dozens of people on death row. Just Mercy tells of his start as a young lawyer and his first case.

31. The Ballad of Songbirds and Snakes

In case you missed one of the top beach reads of 2020, the Hunger Games series now has a prequel. Herein, President Snow is an 18-year-old boy with ambition and a reputation to maintain. He’s assigned the job of mentoring a district twelve tribute, and readers see the Hunger Games before they became the spectacle that they are in Katniss’ story.