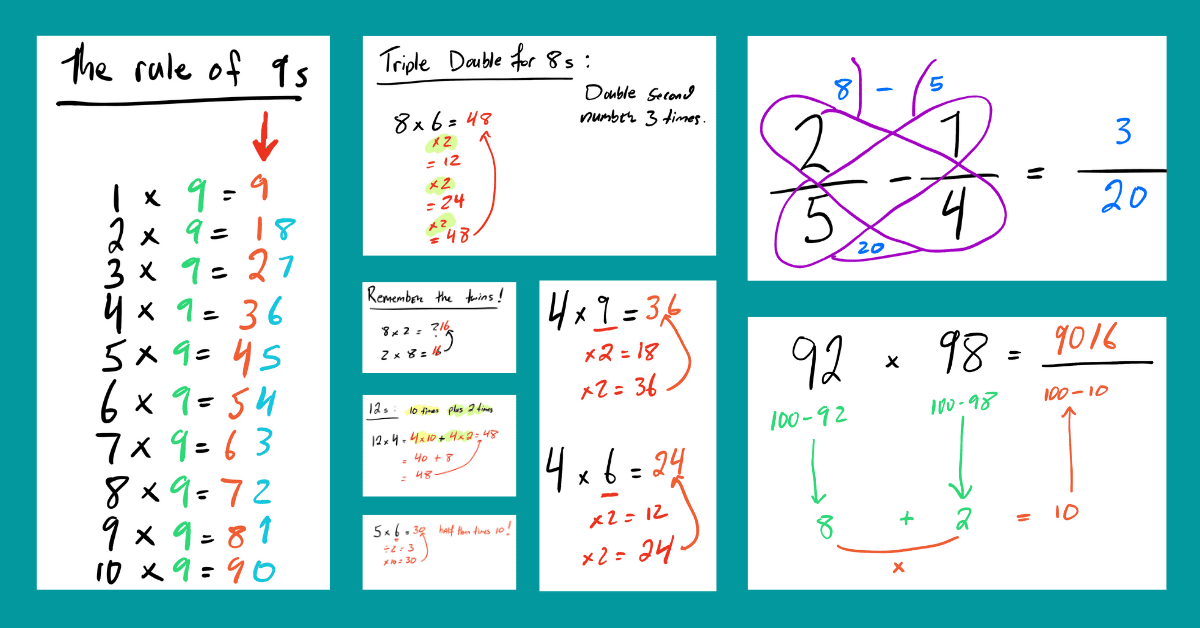 Not all kids can learn math facts using mindless memorization. Indeed, research has shown that rote memorization doesn’t help kids learn the connections between numbers or understand multiplication rules. Fortunately, Mindful Math comes to the rescue with multiplication tricks for finding ways to help kids do math activities in real life. This method is much more effective than only teaching math facts or stressing memorization.

Here are 20 multiplication tricks to teach kids to multiply in creative ways.

First up, we’ve got our friends, the Nines. The Nines are like your friend who always has a slightly plausible conspiracy theory. They both have odd patterns, but it’s probably just a coincidence. If you look at the answer column’s left side, you’ll see that descending the column, the numbers are in order up to 10. Then, jump to the right column and ascend, and the numbers also ascend. Ignore your friend. The universe is not trying to tell you something with this pattern.

Next, we jump into the butterfly method. As you’d expect, this is a method of cross-multiplication but for adding and subtracting fractions. First, multiply the left-to-right diagonal, then multiple the right-to-left diagonal. These two numbers go in the butterfly antenna. Subtract them, and you’ve got your numerator. Multiply the two denominators, and that brings you the denominator for the solution. Don’t forget to reduce your answer!

One of my personal favorites is the double-digit round. This technique is useful for multiplying two double-digit numbers. First, think of a nice, round number to which both of our numbers are closest. Take 92 x 98, for example. Both are close to 100, so we subtract them from 100 to get 8 and 2. Add those together to get 10, and this is your difference! Subtract 10 from 100 to get 90, which is the first part of our answer. Remember 8 and 2? Multiply these to get 16. Therefore, our answer is 9016. Clever, right?

For the next one, remember that all multiplication facts have an identical twin. So, if you forget 8×2, you might remember that 2×8 is 16. We like this one because it cuts the table in half!

9. The Triple Double for 8s

If you’re going to memorize something, start with the squares. Remember every number multiplied by itself. There is no pattern here; these are just important. But, it wouldn’t be number 17 if I didn’t have a trick. When the numbers we are multiplying are separated by 2 (example 7 and 5), multiply the number in the middle by itself and subtract one. For instance, 5×5=25 is one bigger than 6×4 =24 and 6×6 = 36 is just one bigger than 7×5 = 35.

This is one of my favorites because it associates math facts with actual items rather than abstract ideas. Using things like blocks and small toys can help your student see that multiplication is a way to add more than one group of the same number over and over again. For example, in 6×3, ask your student to create 6 groups of 3 blocks each. They will then see that the problem is actually asking us to put together 6 groups of 3.

20. When in Doubt, Use Multiples

Most of these tricks would be a great warm-up exercise for starting the math block and getting into the lesson. Engage students in, turning on their camera and following along while you demonstrate each method. Then, have the students see if they can make their own methods.

For more tips and tricks, check out these math apps that students can play with while waiting for their food at a restaurant instead of asking for more bread 100 times.